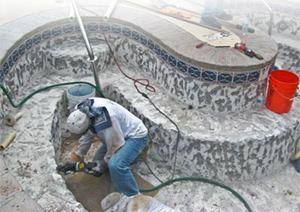 Part of the way

Crews using a bond coat must perform a partial chip-out.

It’s important to remove the plaster immediately under the tile line and around fittings. This allows the plaster or exposed aggregate to be gradually feathered in and wrapped around penetrations, so that they are at the same elevation and prevent leakage or water migration behind the tile.

To chip around the tile, professionals saw cut at least once immediately underneath to allow the material to come off cleanly. This causes the least damage to the tile. Some just cut immediately under the tile, at the joint. Others add a second saw cut, running parallel anywhere from 3 to 12 inches below. Then they knock out the material between the two saw cuts.

When you make two cuts and hit it with the jackhammer, it comes out in a small section. It’s more of a controlled area that you’re taking off. That whole piece comes off. After that, I can get a lot more aggressive for the next few inches down. Some use an angle grinder to make the cuts while others uses hand grinders with a 4-inch diamond blade.

Skipping this step can damage the tile over time. There are guys who won’t undercut, won’t chip, and they just roll the new finish into the existing tile. That runs into a potential problem with water getting down behind the new finish because you’re not really sealing off the top of that new finish. You’re basically exposing it to water penetration.

When doing this, only cut about as deep as the tile. Professionals know the tile is only 3/8-inch thick, so that’s all they’re going down. They’re not cutting any deeper than they have to.

How far to cut beneath the tile depends partly on what type of finish is being used. Plaster and finer exposed aggregates only need to be applied about 3/8-inch thick, so it’s fine to chip out less of the existing plaster underneath the tile. However, when dealing with a pebble finish or other material that must be applied more thickly, a greater amount of space should be opened up underneath the tile. This gives plasterers more room to gradually feather in the material until it sits flush with the tile surface.

Next, crews must check for areas where debonding, commonly called delamination, has occurred. These are nicknamed “hollows.” To find them, drag a chain or rod, such as a piece of rebar, across the pool and listen for a different sound. It’s scratch, scratch, scratch — just like you’d imagine from dragging a chain on the floor — and then you hit a hollow area and it sounds like you’re tapping a bucket. It creates a very hollow resonation, and that’s the separation between the top layer of plaster and the underlying substrate. When doing this, workers can run the chain or rod in a “V” pattern across the whole pool.

There are other times when even those who prefer the bond-coat method will move to a full chip-out. If it becomes apparent that there are multiple layers of plaster in the pool, you will need to remove everything. You want to go ahead and chip off the top two layers so you come back with one.

Whether performing a complete or partial chip-out, certain techniques will help crews remove the plaster while leaving as much shotcrete or gunite intact as possible.

The most frequently made mistake is rushing the job, experts say. After all, not only is it more profitable to get out and on to the next job, but the work is terribly hard, leaving some to want to get it finished.

When you consider that an average pool uses about six batches of material, and a batch weighs 1,000 pounds, that’s three tons of aggregate and cement. When you’ve got a full chip-out, that means, by hand, you’re chipping up the plaster into chunks, scooping it up into 5-gallon buckets, and carrying every bit of it out by hand. It is brutal work.

However, rushing through can lead to removal of too much material. In an effort to speed things along, some will use stronger jackhammers than are necessary, and inadvertently cut into the shell. Use a 60-pound [pneumatic] hammer, and that will do less damage or use the 90-pound jackhammers when we’re doing heavier-duty work like breaking up concrete decks.

Crews also should work with a flat chisel rather than a pointed one, although it’s slower. This reduces the number of pocks pounded into the shell and helps control the amount of material that’s removed. A lot of guys who we run into use a pointed chisel to expedite the process, and it really does a lot more damage than just the flat chisel. The flat chisel, it’s kind of like shaving — you can run a flat chisel along the wall more effectively and just kind of take off what you need. Somebody who would use a point, when they hit it on the wall, it kind of splatters in all directions.

Workers can use wider chisels — 6- to 7-inches — on the floor, and go with a smaller held-held gun for the walls, steps and benches to protect the tile and fittings.

Optimally, the flat chisels should be held at an angle of approximately 45 to 60 degrees to chip slightly sideways. Every time you go straight down you’re creating a divot.

Floor work can be done with the chisel held at less of an angle.

Another key to removing the material efficiently with minimal damage is to frequently sharpen the tools. This makes it easier to strip the existing finish, and creates less damage underneath. You want to keep your points and chisels sharp and have a lot of pressure on them, so they can work quickly and don’t do any more damage to the surface than they have to.

It’s difficult to say how often a tool should be sharpened, because some finishing materials are harder than others. However, all points and chisels should be sharpened before each job. When removing harder surfaces such as pebble, crews will need to sharpen more often. Once the pool has been chipped out, some crews like to acid wash the area in order to remove any remaining residue. But this should be avoided. They’re literally taking off the top layer of cement and making that gunite kind of sandy, which inhibits the ability of the plaster to bond to it.

TIPS
1. If the pool or spa has more than one layer of plaster, consider a complete chip-out to ensure a better bond. This also applies when a large amount of the finish has debonded.

2. Use a flat chisel rather than a pointed end, holding it at an angle. This helps control the plaster removal and minimizes gouging of shotcrete or gunite.

3. When chipping around tile, tape over it to protect it from the jackhammer. Also use lighter, less powerful equipment to ensure it doesn’t shatter the tile.

4. Sharpen the tools as often as necessary — at least once per job for plaster and a few times when stripping a harder material such as pebble.